You are here: Home / Mail Archive / 12V can break your circuit 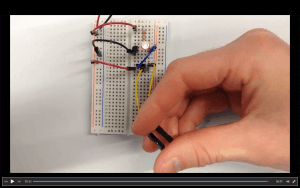 More than 15 years ago, I was sitting in the basement of my parents’ house.

A friend and I were soldering LEDs.

The smell of melted solder was surrounding us, and Eminem’s album “The Marshall Matters LP” was pumping from the speakers.

We were really enjoying ourselves.

I didn’t know much electronics.

But I had found a schematic diagram that showed how to build a running light strip with LEDs.

“Russetiden” was only a couple of weeks away.

It is a tradition in Norway where those who are graduating high school celebrate.

Usually by driving around the city in a red car or a bus for 17 days straight.

We had to get the LED strip to work by then!

It was going to attach to the roof inside of our bus to make it look really cool.

In the basement, we tested the circuit with a 9V battery and everything seemed to work just fine.

The day before the festive time, I was going to install the LED strip in the bus.

…but there was one thing I had forgotten to think about:

In the bus, there was only a 12V output.

Since 12V is not THAT much more than 9V, I figure it would probably work.

So, I connected the 12V to the LED strip…

A bright light in all the LEDs lit up, then some smoke came up and it died.

We had spent several weeks on this, now I had destroyed it in a couple of seconds.

What I learned from that was that it is smart to stick with the specified voltage. Even though 12V is just a little bit more than 9V, it was enough to ruin the circuit.

If I only had some basic knowledge about Ohm’s law, resistors and LEDs, I could have avoided it.

Very simple stuff, but when you don’t know it, it can destroy the project you’ve put so much time into.

Do you have a good understanding of how resistors, LEDs, and currents work?

If not, I really recommend checking out the Ohmify membership. You’ll learn the theory that you will actually need, and you’ll get to practice building lots of cool circuits.

For example a robot, a music player, or a kitchen timer. Learn more here: