You are here: Home / Mail Archive / An embarrassing confession 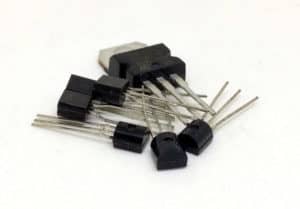 There I was, a 20-year-old electronics student, not understanding how the transistor worked.

It’s a bit embarrassing to admit that it took me so long.

The story starts back in my first year at University.

I had played around with electronics since I was 14, and I was able to build circuits.

But I didn’t understand how most of them worked.

Now, I was in one of my first lectures at the University and the professor was explaining how electrons moved through the transistor.

This continued for many lectures.

I had no idea what he was talking about.

In my head I knew that you needed a closed loop to get a circuit to work:

A path between plus and minus on the battery.

But I could not see how that related to the three legs of the transistor.

And there was no way that I was going to admit that by asking “stupid” questions in front of the whole class.

So I kept silent while listening to the professor going on and on about “n-doped and p-doped semiconducting materials”.

The transistor must be really hard to understand, I thought to myself. Maybe this is not for me?

I don’t remember how long it took, but one day I was looking at some examples, and it all clicked.

I finally understood how it worked!

It was a moment of mixed feelings.

But because when I finally got it, I realized it was very simple.

But the other part of me said: “Why didn’t someone just tell me this from the start!?”

It was so easy!

I’ve never really had any desire to be a teacher.

But the feeling of not understanding something as important as the transistor for such a long time, then learning that it’s actually really easy – that frustrated me.

And it started giving me this urge to inform people about this.

To let them know that it’s not that hard.

Fast forward a few years and I started writing books, articles, and videos.

With the intention of informing people about the things in electronics that I realized was actually pretty easy.

Because I wanted more people to build cool things with electronics.

Ohmify is my most up-to-date resource where I teach electronics.

It’s a membership-site with courses that teach you what you need to be able to build your own things with electronics.

And I’m constantly working on improving it.

I actually just got a research grant from the Norwegian government to further develop Ohmify into something better and bigger.

But more on that in another email.