You are here: Home / Mail Archive / Do you know how current works? 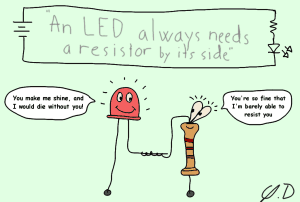 I’m sitting on a train in Norway, on my way towards Oslo.

At least compared to Colombia.

The first Ohmify group has had some time to learn now…

And I’ve gotten some feedback.

One of the members had an epiphany when he realized that it doesn’t matter if the resistor is before or after the LED.

It was a circuit with a battery, an LED and a resistor in series.

In the lesson I say something that a lot of people have asked me about:

“It doesn’t matter if the resistor is before or after the LED. The resistor reduces the current in the whole circuit.”

This is a simple but very important concept to understand.

If you nod your head and think, “yes, that makes sense”, then you got it.

If you are struggling to understand this, you will gain a lot from learning more of the basics.

In my eBook “Getting Started With Electronics” you’ll learn the basics. More info here: