You are here: Home / Mail Archive / How to build your idea and make money with it? 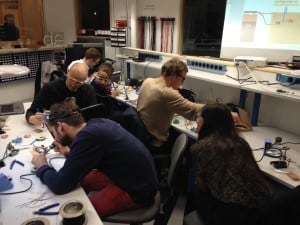 He wanted to build an automatic coffee machine.

So he wanted to perfect the coffee-making-process.

He had a simple 3D printer to print parts for the machine.

But he was not happy with the printed parts.

This was about three years ago.

On Monday, Elias launched his second crowdfunding campaign on Kickstarter:

8 hours later, he had received the funding he asked for.

I’ve been a part of the team and helping out a little bit here and there.

But Elias is the mastermind.

I know many of you are dreaming about building your own idea and selling it.

So I asked Elias: “Do you have any advice for people who would like to build their own prototypes and ideas?”

ELIAS: Keep at it! Even though someone makes something that seems similar, just keep hacking away at your own creation, and people will spontaneously pop out from no where and tell you they love the direction your project is taking! That’s rewarding.

I asked how he got started in electronics, and it was NOT by studying theory. He jumped right into the practical stuff and started building things from the start.

But of course, now he also has a strong theoretical knowledge.

If you want a step-by-step guide to building circuits, even with no experience from before, check out my eBook “Getting Started With Electronics”: