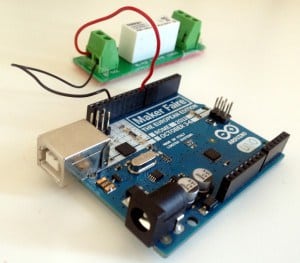 He swipes his hand in the air, and the lamp changes color.

He pushes a button, and a music icon is shown on his gadget.

Then, he makes a swiping gesture on the gadget, and a song starts playing on the speakers.

And now I want one.

On Tuesday, I went to visit Tobias Eichenwald and this crew.

They are the guys behind Nuimo, a really cool controller for both computer programs, and smart houses.

In the window, Thobias points at a big clumsy brick of electronics.

“That’s one of the first prototypes,” he says.

“In the beginning we just used an Arduino with sensor modules.”

The apartment is both their living room and their office. And it’s filled with different technical gadgets.

Now, their Kickstarter campaign has raised almost $200 000 US dollars. You can find it here:

How did they do it?

“We wanted to create better user interfaces, to enable people to interact with technology in a more natural way. Before building anything, we interviewed a lot of people.”

“Then we created what people wanted. Starting with an Arduino prototype.”

Arduino isn’t just a toy to play around with for beginners.

It’s a powerful tool that you can create real and useful things with.

I will show you some real state-of-the-art technology combined with Arduino soon. Just gotta fly to Norway and pick up some stuff real quick ;)

Want to build your own prototypes?

Learn Arduino through my mini-eBook: «Get Started With Arduino» It’s available with two of the “Getting Started With Electronics”-packages here: