You are here: Home / Mail Archive / Playdate with Captain Credible 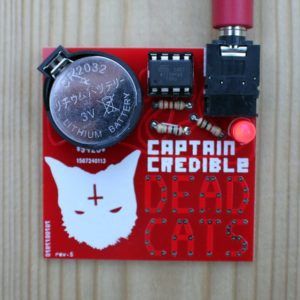 Yesterday I met up with Captain Credible who is a musician known for his violently eccentric live performances and arsenal of homemade instruments.

We created some really cool circuits together for creating sound.

Have you ever seen the blinking the LED circuit based on using an inverter?

Here it is:
https://www.build-electronic-circuits.com/wp-content/uploads/2014/04/blinking-LED-circuit-schmitt-inverter.png
This circuit is one of the easiest ways to blink an LED.

But you can make sound with it also!

And that’s what we did yesterday.

The resistor R1 and the capacitor C1 are what sets the “blinking speed”.

By using a capacitor of 0.1µF, the “blinking speed” becomes really fast.

Too fast to see the blinking.

But connect a speaker instead, and you’ll hear sound!

That was the basis circuit, and we created lots of ways to mess around with the sound and create some really cool effect.

We decided to meet up again next Monday and continue the project.

I’ll upload a video of our two meetings after Monday.

The blinking LED circuit is part of my eBook and kit called 9 Circuits:

https://ohmify.com/get9circuits/
And with the parts that come with the kit, you can modify the circuit into creating sound like we did yesterday.