You are here: Home / Mail Archive / Is it really just a wire? 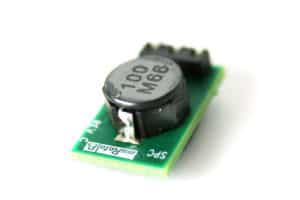 The inductor is one of those components I’ve always found weird.

Circuits with inductors often have an explanation with lots of mathematical formulas.

But when it comes down to it…

…an inductor is really just a coil of wire.

If you take a wire and wind it up into a coil, you’ve created an inductor. To me, it’s almost a bit magical that a simple wire can do this:

When you apply a current through the coil, a magnetic field is created around it.

And this field stores energy.

It just lets the current pass through.

But when the current through the inductor changes, the built-up energy in the magnetic field will resist this change by changing the resistance of the inductor.

Resistance to change is a good thing for example to create a filter to reduce noise.

Noise can be anything from sounds that are not supposed to be there in a musical recording, to small changes in the voltage of a power supply that shouldn’t be there.

But honestly, I don’t use inductors a lot.

I use them sometimes in power supplies or radio transmitters.

But mostly, the values I need to use are already given by the manufacturer of whatever chip I am using.

That’s one of the reasons electronics has become easier in many ways.

You don’t need to know all the heavy calculations with complicated math to build advanced things with electronics.

If you want to get started building circuits, check out my eBook 9 Circuits that contains 9 fun projects for beginners: