You are here: Home / Mail Archive / Support our mini-display project 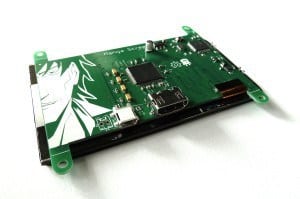 My friend and I built a mini-display.

We bought a replacement screen for an HTC smart phone, added some electronics and a multi-touch panel, and made it HDMI compatible – so you can easily plug it into your computer, Raspberry Pi, Beaglebone Black and such.

This means you can build gadgets with really nice graphics, like a handheld gaming device, or your very own smart phone!

I have to admit that my friend Elias put in a lot more hours than I on this project. He is the main guy behind this. But I programmed the firmware to turn a capacitive film into a USB multi-touch device.

And that was incredibly fun!

It’s available as a kickstarter project now. The video there gives you a better idea of what it actually is: