You are here: Home / Mail Archive / This little trick from my father helped me a lot 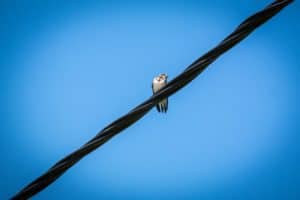 In my early curious days, I was wondering:

Why doesn’t a bird sitting on a high power line get fried?

For the sake of discussion, let’s say the bird has both feet on the line and therefore we have a path for the current to flow in.

My father told me that the current will take the path of least resistance.

Since it’s much less resistance in the wire, the current prefers to continue to flow in the wire instead of going through the bird that has much more resistance.

This was a simplification, but it helped me a lot in the beginning to understand examples similar to the bird example.

I remember taking that simplification over to a physics class once.

The teacher showed two resistors in parallel, one big and one smaller, on the blackboard.

Then he asked us how the current would flow.

I raised my hand proudly and said it would go through the small resistor since the current takes the path of least resistance.

That was not the correct answer…

Instead, the teacher showed us how to calculate the current going through each of the resistors.

Yet another use for Ohm’s law:

In the bird example, if you go into the theory, you’ll find that it will be a tiny, tiny, tiny current flowing through the bird also.

The current is given by voltage drop divided by resistance.

The voltage drop will be as good as zero.

So the current through the bird would be that tiny voltage divided by the resistance of the bird, which would maybe be a few megaohms.

And you’d end up with a number so small that it would be hard to even measure it.

And too small for the bird to notice.

For every practical purpose, it would be 0.

So the simplification works.

…and it works in other scenarios also where there is a huge difference in resistance between the two paths.

In Ohmify, I like to teach electronics using both simplifications to get a conceptual understanding, and theory to be able to calculate the correct answer.

There has been a boom in signups for Ohmify lately, and I am so grateful for your support and trust. If you’re curious about joining, learn more here: