You are here: Home / Mail Archive / What’s all the fuzz about? 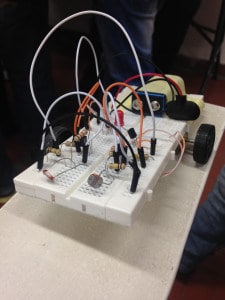 I could see that some kind of commotion was building in the back of the class room.

Others were starting to gather around.

When I went over, they were sooo excited.

It was a group of young students and their teacher who had built a little light-following robot.

And they were just about to test it out.

I followed them into another room which was much darker. They put their robot down on the floor and turned it on.

…and the robot started moving towards it.

The look on their faces were priceless! They were so excited and happy that they had built this robot on their own from scratch. And it worked!

Lots of people came over, wanting to see the robot they had made.

They were so proud.

This happened about two months ago in a small town in Colombia.

And that’s when I got the idea for my new online course “How To Build Your First Robot”.

I’m almost ready to release it.

I’ll tell you more in the next email.