The CD4017 IC is a decade counter that counts to ten. It has 10 outputs that represent the numbers 0 to 9. The counter increases with one for every rising clock pulse. After the counter has reached 9, it starts again from 0 with the next clock pulse.

This is a great chip for making running LEDs! See a circuit example further down.

What is a Decade Counter?

A decade counter counts to 10. You can remember it by thinking of a decade in years, which is ten years.

This is also known as a ring counter. Below you can see an example of a 4-bit ring counter:

The counter circuit in the CD4017 however, is not a standard ring counter. Instead, it uses a technique called a Johnson counter that makes it possible to achieve the same with only 5 flip-flops plus some logic gates.

Typical applications for the CD4017 include LED chasers, alarms, frequency dividers, or even a music sequencer.

First of all, you need a power supply voltage of 3 to 15V. Most versions of the chip support up to 18V. But for instance, the HEF4017 recommends only up to 15V.

The output pins Q0 to Q9 goes high one by one as the counter increases. Connect each to a resistor and LED if you want to see pins change state.

The Clock Inhibit (CI) pin disables the counter so that any clock pulse on the CLK pin is ignored. Set this pin to low to enable the counter.

The Carry-out (CO) pin goes from low to high when the counter reaches 10 and resets back to 0. It stays high for 5 clock pulses, then goes low again. Connect this pin to the clock input of another decade counter if you want to count higher than 10.

One of the most popular hobbyist projects to build with this chip is the running LEDs circuit.

A 555 Timer is set up in astable mode, which makes it into an oscillator circuit that creates a clock signal. This clock signal goes into the clock input of the IC 4017.

Every time the clock input goes high, the counter in the 4017 increases, which makes the next output HIGH. LEDs are connected to each of the outputs and therefore appear to be “running” along a line.

Note: Some versions of the 555 IC require a 0.01µF capacitor between pin 5 and ground/minus.

The LEDs blink in sequence from the first to last and then starts from the first again. You can use this technique, for example, to create blinking Christmas lights.

After reaching Q9, the 4017 will restart the count and restart from Q0. If you want to limit the number of LEDs, all you have to do is connect the corresponding next output bit to the MR pin.

For example, if you have only 5 LEDs, connect the Q6 to the MR pin. When the count reaches the 6th bit, it sets the MR pin and resets the operation.

With some small modifications to the circuit above, you can build the knight rider LED bar:

How To Set the “Running” Speed

The number of times the output from the 555 Timer goes HIGH per second is the frequency and is given in Hertz (Hz). For example, 10 Hz means ten times per second. And that means the LED moves 10 positions per second.

The resistors R1 and R2, and the capacitor C1 decide the frequency according to this formula:

Note: R1 should never be less than 1 kΩ as it might damage the chip when Pin 7 (Discharge) is connected to ground.

If you want to try different values, you can use this 555 Timer calculator to help you.

Alternatives and Equivalents for CD4017

If your local electronics store doesn’t have any of these chips, check out my list of online stores for other places to buy from.

The CD4017 is a very common IC, so you should be able to find it in one of the online stores. But as an alternative, it’s possible to use a BCD counter such as the CD4510. Then connect the output of it into a CD4028. 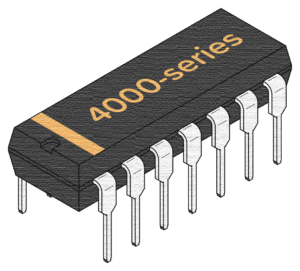