The knight rider light bar circuit creates a running light similar to the light bar on the car from the television show Knight Rider.

It’s a really fun circuit to build. I once built a larger version of this for the inside of a party-bus I was a part of. Unfortunately I broke it the first day because I increased the voltage too much, but that’s another story.

You can build this circuit if you’re a total beginner, but of course it’s a bit easier if you have already built a few circuits before.

To create the knight rider light bar, you need to build two parts; an oscillator and a counter. 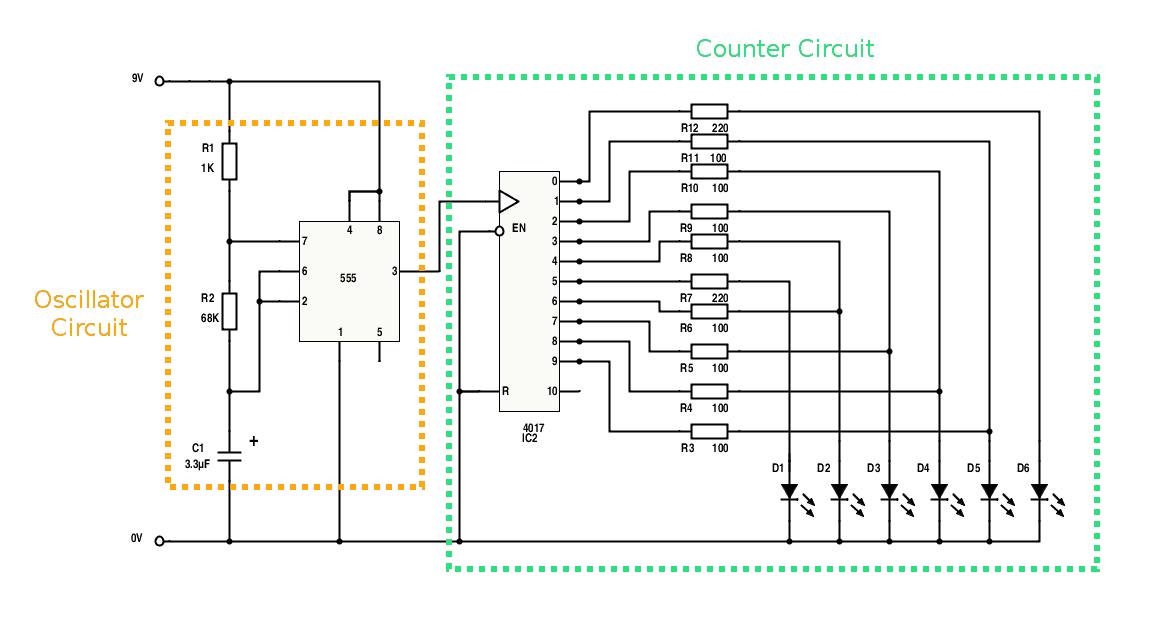 You can find these components at one of the many online electronics shops.

The counter is built using the 4017 Decade Counter chip.

There are only 6 LEDs, but 10 counter outputs. Each of the LEDs on the two sides connect to output 0 and output 9 as shown in the knight rider circuit diagram above.

The rest of the outputs each connect to two LEDs. This gives us a light that looks like it’s running back and forth.

The counter starts at 0 and increases every time it gets a pulse on its counter input.

The oscillator is built around the 555 Timer chip.

This is the part that creates the pulses for the counter input. The speed of the oscillator (i.e. how many pulses it has per second) determines how fast the light will run back and forth.

The resistors R1, R2 and the capacitor C1 sets the frequency of the oscillator.

You can find the output frequency of your circuit by using the following formula:

The frequency equals the number of pulses per second.

How To Build The Knight Rider Light Bar With LEDs?

The circuit can easily be built on a breadboard or on a prototyping board for soldering.

I usually like to build the circuit on a breadboard first. Just to make sure I understand it and am able to build it before soldering it onto a prototyping board.

Once the circuit is soldered, it’s a little bit harder to make changes if you messed something up. (But not too hard though, you can always desolder).

Start by connecting the oscillator part. Connect it at the top of your breadboard so that you’ll have lots of space to connect the rest of the circuit below.

Then test the 555 timer oscillator by connecting an LED in series with a resistor on the output. With the values chosen above, your LED should blink about 3 times per second. 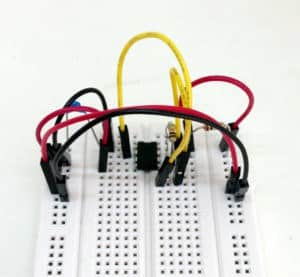 Now that you know your oscillator is working, you can connect the remaining parts.

Connecting it as shown in the knight rider light bar circuit diagram shown above.

What If The Circuit Doesn’t Work?

Post your comment below if you tried to build this, and let me know how it went!