You are here: Home / Basic Electronics / Types of Diodes

A diode is a component that only conducts electricity in one direction. It is commonly used to convert from alternating current (AC) to direct current (DC). 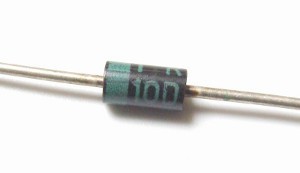 Several types of diodes exist. And it can be a bit confusing if you have never worked with diodes before.

I would like to share the most standard types of diodes that are commonly used by hobbyists.

Read more about what a diode is.

The Most Standard Diodes

The rectifier diode is typically used for rectifying alternating current (AC) to direct current (DC). They can usually handle big currents and voltages. Sometimes referred to as power diodes.

The most typical signal diode is the 1N4148.

The zener diode is a component that will become very conductive (meaning that it will allow lots of current) for a certain voltage. This voltage is called the zener voltage.

Other Types of Diodes

It is also much faster and is therefore often used in RF circuits.

A light emitting diode or LED is a diode that emits light when forward biased. It is available in several different colours, even ultra-violet and infrared.

A photodiode is a diode that conducts when it detects light. Could be used to receive the infrared signals from a remote control.

If you are a beginner and wants to become one of the hobbyists, learning about the types of diodes is one thing. It is also important to learn about what and where to buy electronic components.

Return from Types of Diodes to Electronic Components Online