You are here: Home / Mail Archive / Is the current lower after a resistor? 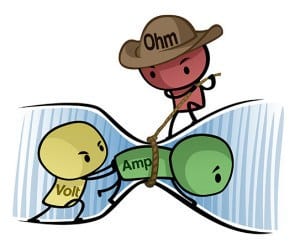 But let me make it clear:

The current after a resistor is the exact same as it was before the resistor.

“But doesn’t the resistor reduce the current?”

A circuit always has a bit of resistance, no matter if it has resistors or not in it.

Even wires have a little bit of resistance.

So let’s imagine a circuit – any kind of circuit – and say that it’s current is 1 ampere.

If you now add a resistor in series into this circuit – the current of the circuit will be smaller.

So yes, the resistor does reduce the current.

This is one of the mindset shift a beginner has to go through when learning electronics.

But after a few examples…

..and a bit of practice…

…this becomes obvious, and it becomes much easier to understand what all the circuits actually do.

If you want to learn with me, I’m teaching electronics from scratch at Ohmify.