A current limiting resistor is a resistor that is used to reduce the current in a circuit.

A simple example is a resistor in series with an LED. 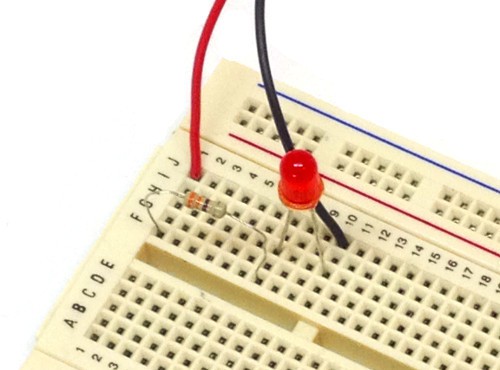 You would usually want to have a current limiting resistor in series with your LED so that you can control the amount of current through the LED.

Check the datasheet of your component to find voltage drop and the appropriate current for your LED.

If you can’t find a datasheet, you can test it.

Connect the LED and a resistor in series to a variable voltage source. Start at 0 volts and increase the voltage gradually until the LED lit up.

Measure the voltage over the LED and the current going through.

Let’s say the LED needs 15 mA and has a voltage drop of 2 volts. You have a 5 V power source that you would like to power it with. Which resistor value do you need?

Ok, so we have 3V and we want to have 15 mA going through the resistor and the LED.

To find the necessary resistor value we use Ohm’s law.

So the necessary value for the current limiting resistor is 200 Ohms.

So you know that you need a 200 Ohm resistor.

But when you look for components you find that there are several different types of resistors.

Well, the only thing you need to be aware of is the wattage rating of the component. How much effect can the resistor handle?

So you need to figure out how much effect that will be dissipated in your resistor.

To find this you use the following formula for calculating power

It states that power equals the current multiplied with the voltage. So we get

This means your resistor must be able to handle at least 45 mW.

Usually, most resistors handle from 250 mW and up, so it will be easy to find a suitable resistor.