You are here: Home / Basic Electronics / Through-Hole Components or Not? 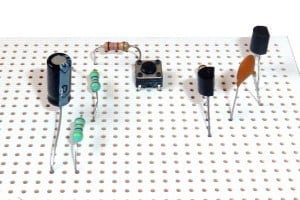 «It went through the circuit board, like a knife through warm butter.»

This could have been the intro to an incredibly capturing novel about through-hole components. But it’s not. I don’t think anyone has made a novel about such a narrow topic.

Oh, wait! I had to do an Amazon search after writing that. Turns out this one is something close. But something tells me it won’t start like my example-intro.

What are Through-Hole Components?

Through-hole components are electronic components that have pins that go through the board. And you solder them on the other side of the board.

It could be a resistor, a capacitor, or even a microcontroller. If it has pins that go through the board – then you guessed right – it’s a through-hole component.

Through-hole components have been in use in the electronics industry for many, many years. But they are becoming less and less used. Instead, surface-mount components are taking over instead.

The reason for this is that surface mount components take less space and require a simpler soldering process. At least it’s simpler for machines to do it – not humans.

When to Use Through-Hole Components?

I would say: Use through-hole as much as possible, but not more.

(Yes, that’s a rewrite of Einstein’s «Make everything as simple as possible, but not simpler»)

For example, if you are making a product that you are planning to mass-produce, then it’s a better idea to use surface mount technology. It will be cheaper in the long run.

But if you want to make your first blinking light, then stick to through-hole.

As long as you don’t have any strict space or cost requirements, then use through-hole when possible.

The reason I promote through-hole over surface mount, is mostly because their easier to solder.

Return from «Through-Hole Components or Not» to «Electronic Components Online»