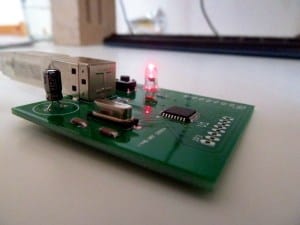 To complete today’s part of the microcontroller tutorial – I have doubted myself, I’ve burned my finger and I’ve received a surprise bill from the customs.

But all in all, I’m very happy with the result. I made it work. And I love the feeling I get when I make something work!

We are now at part 5, the final part, of the microcontroller tutorial. Up until now we have learned:

I have just received the boards I ordered in the previous part, and today we are going to solder the board and program it.

To solder the board – I am going to use my old Ersa 30 soldering iron. The tip of it is a bit big, so it’s really not the ideal tool to use.

But it’s what I have on my desk right now.

And it’s also a way for me to show you, that you don’t need any fancy equipment to make this circuit.

You can make this circuit at home. 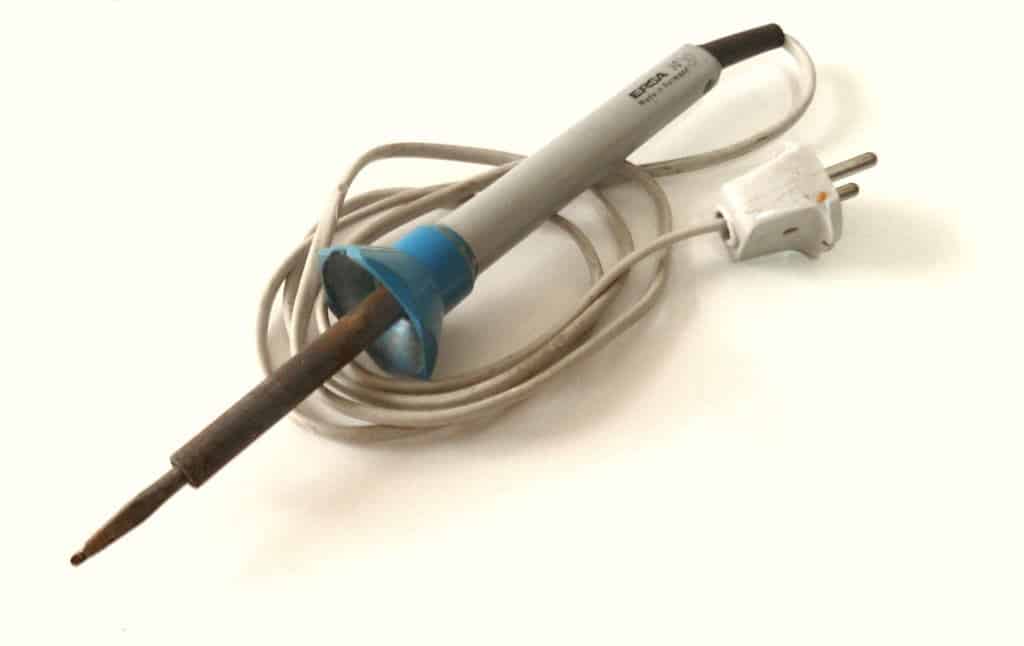 Because I wanted to put everything on one side, I chose to use mostly SMD (Surface Mount Device) components when I designed the circuit board.

So to solder this, I’m going to use the techniques from my smd soldering article.

Since the microcontroller chip was the most difficult thing to solder, I started out with that one.

First, I added some solder to one corner pad. I placed the chip carefully, using a pair of tweezers. And I made sure that all the pins were placed correctly over their pads.

Then, while holding the chip in place with the tweezers, I placed the tip of my soldering iron onto the pin and pad of the corner where I already added solder – making the solder melt.

I removed the tip, and let the solder cool for a second. The chip was in place. Now, all I needed to do was to apply a bit on solder onto each of the pins, to make them stick to the pads on the board. 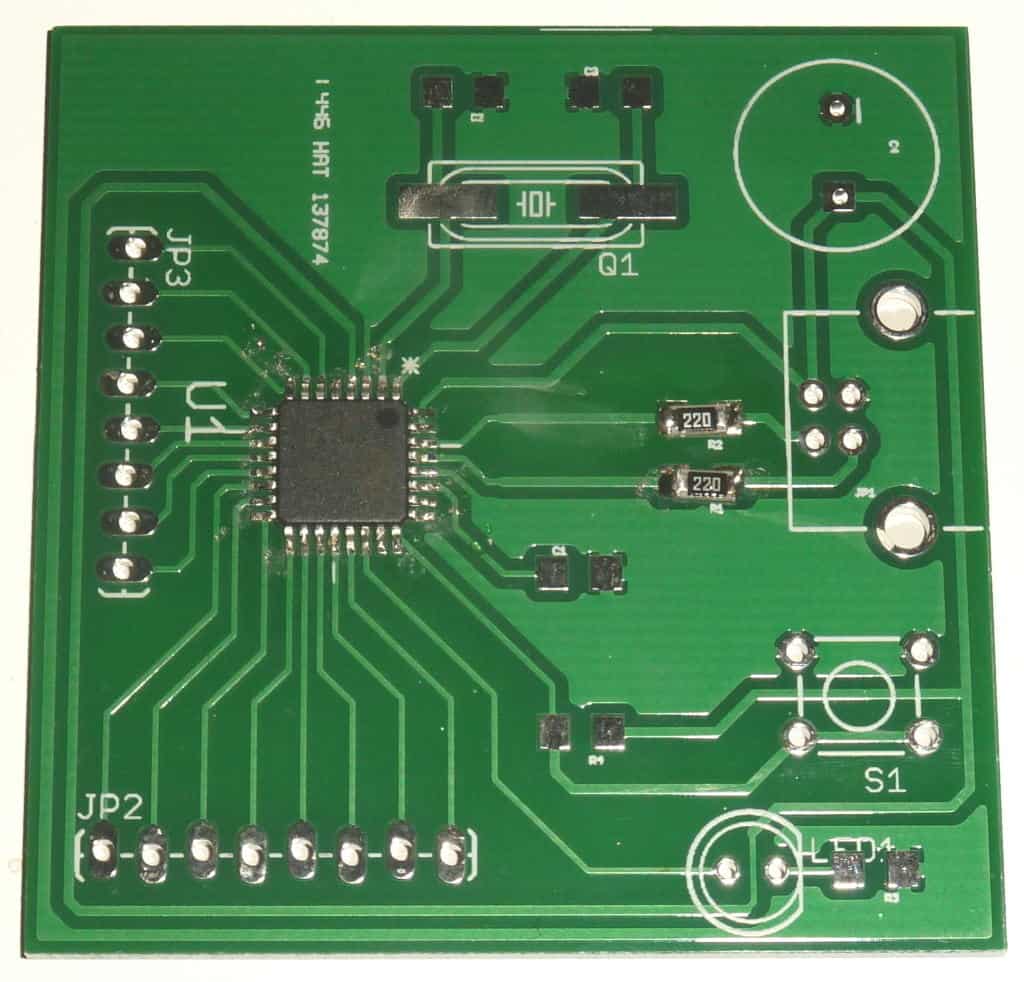 This was a clumsy process with the thick tip of my soldering iron. But, by keeping my cool and being patient – I was able to solder all the pins onto their pads. We only need a tiny bit of solder each pin.

As you can see from the picture above, soldering with the large-tip soldering iron was a bit messy. But it doesn’t matter – as long as it works.

Soldering the Other Components

After I’d managed to solder the chip, the other components were easy. I might not have gotten them perfectly aligned, but it wasn’t that bad either. 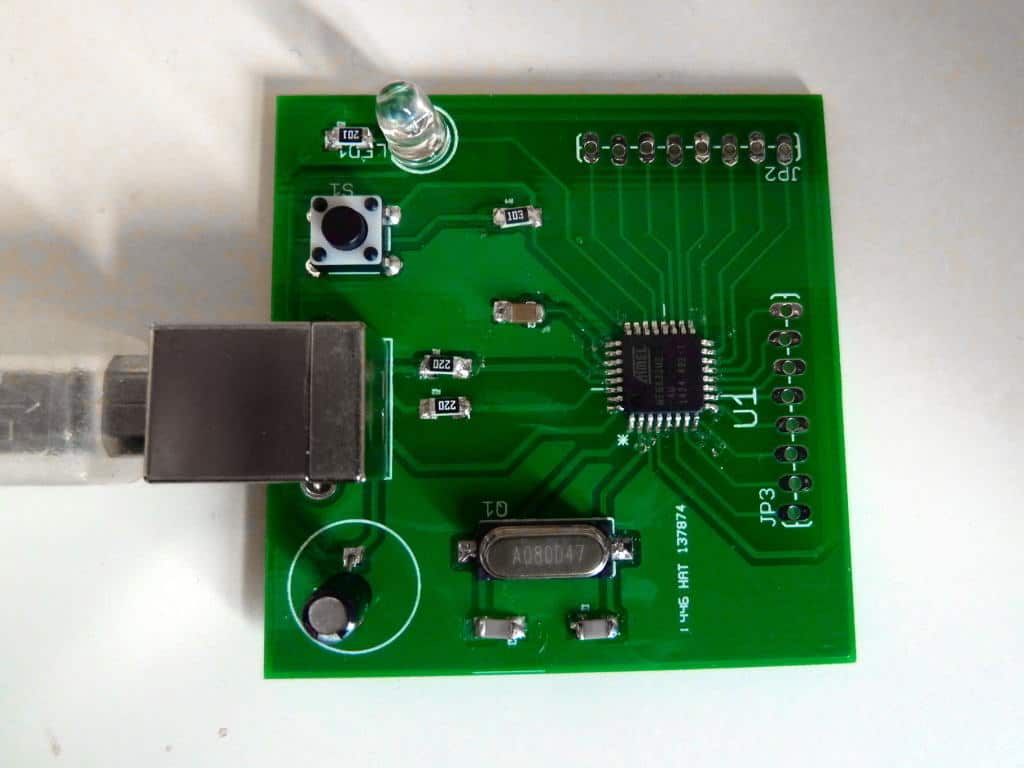 The ATmega32U2 chip comes with a pre-programmed boot-loader that should make it appear as a USB device when plugged in to a computer.

After everything was soldered, I SHOULD have inspected the solder joints closely with a USB Microscope or something. It’s smart, because if there are any short-circuits caused by a tiny little solder blob somewhere, we could damage our circuit.

I plugged it into my USB-port and…

I was a bit disappointed for a brief second. Until I realized that nothing was supposed to happen. I only had one LED on the circuit, and it was connected to an IO pin.

So I needed to check if it showed up as a USB device on my computer.

Now that I knew the USB-part was working, it was time to program the circuit with some code.

I’ve written about microcontroller programming before.

To make a simple test, I created a blink-LED code. It does nothing more than blink the LED on the board.

Here is the code I used:

I saved the code in a file called blink-led.c. Then, I used a tool called avr-gcc to compile the code.

Because I am using a Linux machine with Ubuntu, this is very easy to do (for Windows, check out Win-AVR). First, install the application by opening a terminal window and typing:

Then you can compile by typing in these two commands:

Now we have a file – blink-led.hex – that we can upload to the microcontroller.

You can find more information on the commands here.

Upload Program Onto Board

To get the program onto the board I used dfu-programmer. First, install it:

First we need to erase the old memory (note that this is important – even if your flash is blank):

Then we flash the microcontroller with our program:

I needed to unplug it from the USB, then connect it again…

I’m gonna play around with the circuit for a little bit, then I’ll probably post some fun projects you can make with it.

Until then, I urge you to read all the parts of the tutorial to get a full understanding:

Now, after reading the whole tutorial – what are you struggling with? Post your questions and comments below.