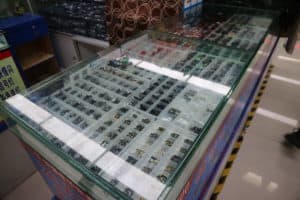 “We’re never going to make it!”

Jensa (from the hackerspace Bitraf) and I arrived early at the airport in Oslo.

But that didn’t help.

Our flight from Oslo had technical problems.

Not a good start of our trip.

But these things happen. And one day later than planned, we arrived in Shenzhen, China.

Elias (of MangaScreen and Replicape), was already waiting for us.

So, we shared a bag of fish-skin chips with egg yolk (!), then headed out to town.

I’ve wanted to visit Shenzen for more than 10 years.

It’s a very important city in the electronics world. There are lots of famous products that had been produced there.

In a “normal” city, you will see billboards with Coca-Cola ads and similar. In Shenzhen, the billboards have ads for capacitors or LEDs.

And there are skyscrapers covered with LEDs to make them giant video screens.

The malls are full of electronics shops. There are whole floors dedicated to LEDs. Or connectors.

And they are full of interesting gadgets.

Here are some of the things we bought:

* An electronic drawing pad for $5. Very simple, just a pad you can draw on. And a button to erase everything and start over again.
This is great for doing calculations or practicing drawing.

* LED-strips for your eye-lids. Cost around $1. Not very useful, but probably very fun at some event where you need to use a costume, like Halloween.

* Electric muscle stimulator. I was the lucky one to get to try this. At low intensity, it was a fun series of mini-shocks. At high-intensity it was extremely rough, making my arm motionless.

* A drone. Elias wanted to make cool drone-footage for a video. But he didn’t want to spend too much. The drone was fun, but the image quality of the camera was horrible.

* My wife wanted a purse. So I bought her USB stick shaped as a purse.

Because of my delayed flight, I only got to enjoy Shenzhen for three days. I got a taste of what the city has to offer, and I will definitely be back in the future.

Wanna see what it’s like? I’ve put together a video with a little taste of Shenzen. Check it out below:
https://youtu.be/jWYqagc1jH0