You are here: Home / Basic Electronics / What You Need to Know About Current, Voltage and Resistance

Current, voltage and resistance are three important concepts in electronics. I didn’t have a clue about these things when I started out. But I could still build fun things, by following the circuit diagrams I found. I just didn’t know what was going on.

When I started learning about basic electricity in school, many pieces started to fall into place. I started understanding some of the explanations from the circuit diagrams I built.

I like to focus on the practical parts of electronics. But learning some theory as you progress is also really useful. So in today’s article you will learn the basics of current, voltage and resistance.

When you connect a small light bulb to the positive and the negative side of a battery, you will get a closed circuit where electrons can flow between the terminals and make the lamp shine. Inside the wires of this circuits, you will have electrons flowing.

When I started out in electronics, I misunderstood something. I thought that when a battery got connected, the electrons started from the battery and had to travel all the way through the wire, up to the bulb, before it was lit. But this is not the case.

A wire already has electrons in it. And when you connect a battery and make a closed circuit, they start to move. It’s like a pipe filled with marbles. When you put a marble in on one side, another comes out on the other side right away. You don’t have to wait. It happens momentarily. 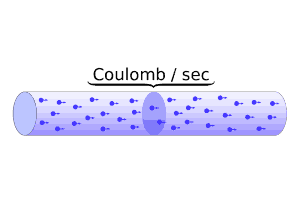 The Confusing Direction of Current

First of all, let me say this: It doesn’t really matter!

But what is right?

So, in a normal electric circuit based on metal, electrons will flow from the negative terminal to the positive. But, the conventional way of talking about current direction is from positive to negative. (Learn more on this from Wikipedia)

If this sounds Greek to you, don’t worry. Think about it this way: If you have water running in a pipe, the amount of water running is the equivalent of the current in an electrical circuit.

Then imagine that the pipe is clogged at some point. And only a little bit of water gets through. The water pressure on one side of the clog will be higher than on the other side. This difference in pressure between the two points is the equivalent to voltage. You always measure voltage as a voltage difference between two points.

The clog itself would be the resistance.

The relationship between current, voltage and resistance is called Ohm’s Law.

Here is a nice illustration: 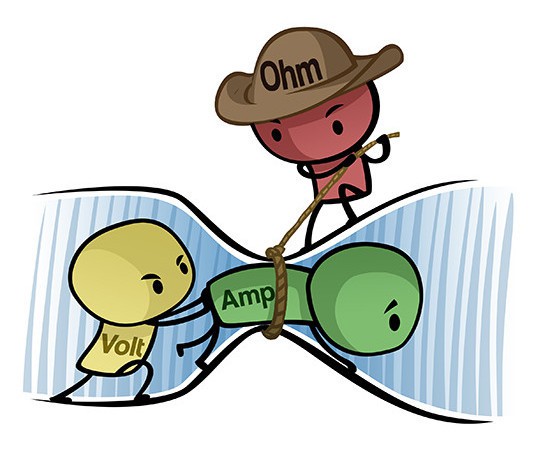 Next Step:
The Simple Guide to Learning Electronics for Beginners