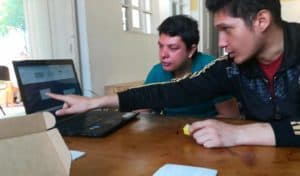 We started out as a group of three people.

Eduardo, Jefferson, and me.

Today, we discussed what to build.

We wanted to build something that would be fun, and that we could finish within the time frame I’m going to stay here (~2 months).

And it should be based on an Arduino.

But such a machine is a bit complex, so we decided to discard that for now.


We watched some videos on YouTube and got really excited.

A sumo robot it is!

What we decided to get

Until next time, we will buy the components needed. We’ll meet up in one week to build the H-Bridge circuit needed to control the motors.

Go back to the overview of Club de Arduino