You are here: Home / Circuits / Timer Project with Gong

This is a timer project I recently made. 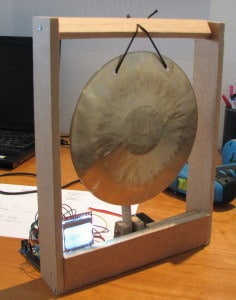 I am really into productivity techniques and I think using the Pomodoro technique is a nice way of working when you need to be productive.

You work hard for 25 minutes, then take a 5 minute break.

Also, I have found that the sound of a gong makes me really relaxed and focused. So I decided to build a timer project with a gong.

Components for the timer project

I bought a gong and a mallet from Gongs Unlimited.

I wanted an indication of how much time there was left, so I needed some kind of display. Luckily I had a Nokia display with breakout board from Sparkfun which would work very well for this usage. I also had a small servo motor from an old RC helicopter that I could use to control the mallet.

I decided to use an Arduino for my timer project because that makes controlling the display and servo motor really simple. And adding a timer is also really simple on an Arduino. 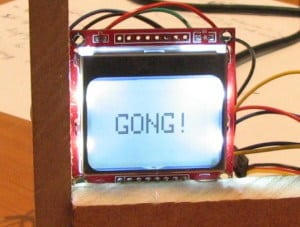 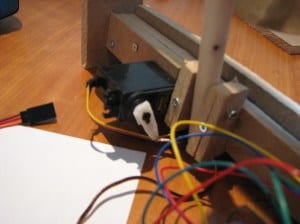 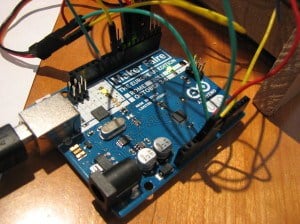 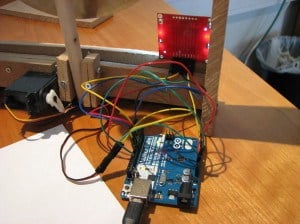 First of all, I needed a stand for the gong and the mallet.

I built a very simple prototype by cutting and assembling a chipboard. As you can see, it’s not much to brag about, but it holds the gong, the mallet and the servo in their places. (If I make a 2.0 version of this, I will probably get some laser cut parts instead)

Then I programmed the Arduino using libraries to simplify the code. I used Servo.h for controlling the servo. I used TimedAction.h for the timer functionality. And I used an Adafruit library to control the display.

I spent a lot of time creating the perfect “Gong!” -sound for my timer project. I had to make the servo turn just enough to hit the gong hard, but I also had to make sure it went back fast enough to let the “Gong!”-sound last.

The timer will start a few seconds after the Arduino is powered on. It starts with a “gong”. Then after 25 minutes it “gongs” again and the timer stops. I reset the timer by pressing reset on the arduino. 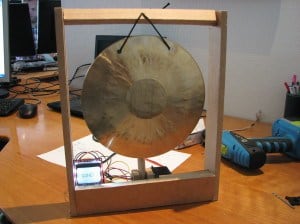 I have a video of it, but I’m currently in Guatemala with limited internet bandwidth. I will upload once I am somewhere with some more bandwidth.