You are here: Home / Mail Archive / The circuit that makes sound 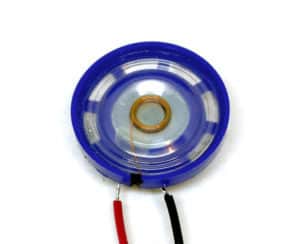 “The music that we are hearing is actually 8 seconds old”

That was my friend’s claim.

My friends and I were about 13 years old, and we heard loud music coming from a big event about 3 kilometers away.

“The speed of sound is 340 meters per second, and the event is 3 kilometers away. So that means what we are hearing now is actually what they played 8 seconds ago at the stadium” our friend told us.

I found it hard to accept because I didn’t know too much about sound and how it worked.

But our friend was really good at memorizing facts.

And he was right.

I, on the other hand, was more interested in understanding things.

And more importantly: How I could create sound.

Now, 20 years later, I know that sound is variation in pressure in the air.

For example, if you move your hand back and forth really fast, you are creating a variation in pressure in the air.

Humans can’t hear anything below 20 Hz. So unless you’re able to move your hand back and forth at least 20 times per second, you won’t be able to hear any sound.

To make sound with electronics, you have to make “something” move back and forth at least 20 times per second (or 20 Hz).

This “something” could be the diaphragm of a speaker.

To make it move, you could, for example, create a circuit that alternates between 0V and 5V, and feed this voltage into the speaker.

Such a circuit is called an “oscillator”.

The easiest oscillator circuit I know of is the blinking light circuit in Chapter 5 of my eBook 9 Circuits:
https://ohmify.com/get9circuits/

That circuit blinks an LED about 1 time per second.

But by reducing the value of the capacitor in the circuit, it can easily give out a few thousand hertz. Replace the LED with a mini-speaker, and you should hear the sound.