This LDR circuit diagram shows how you can make a light detector. An LDR or “Light Dependent Resistor” is a resistor where the resistance decreases with the strength of the light.

Here is the schematic for the circuit: 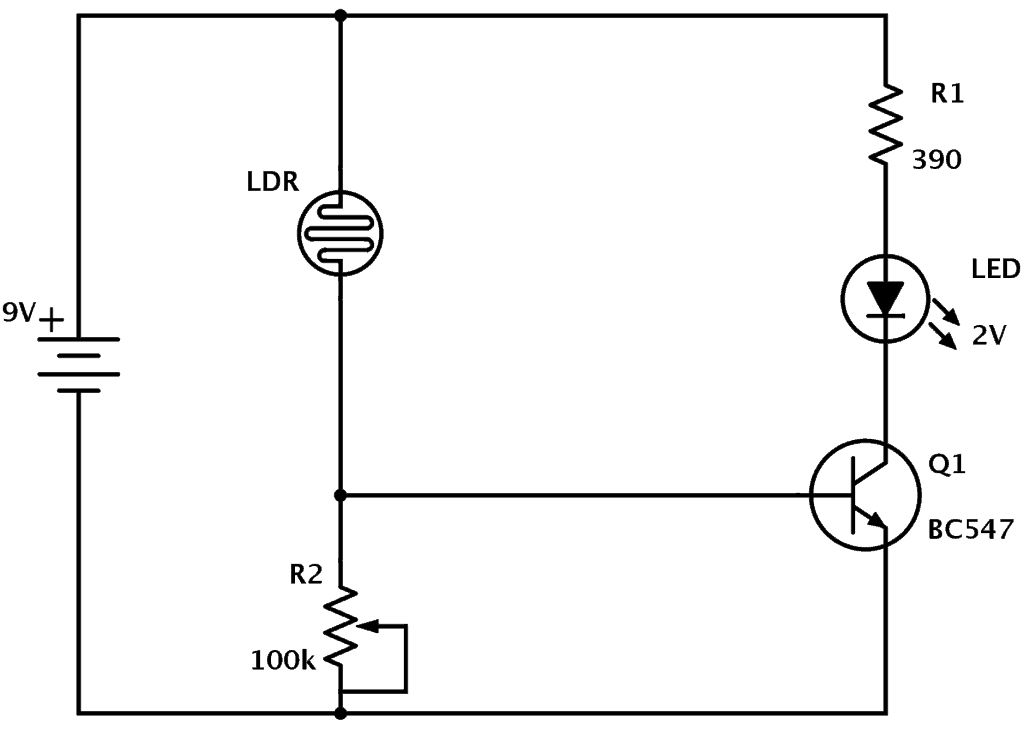 Light Dependent Resistors (LDR) are also called photoresistors. They are made of high resistance semiconductor material. When light hits the device, the photons give electrons energy. This makes them jump into the conductive band and thereby conduct electricity.

Check out Wikipedia for the physics stuff ;)

How The LDR Circuit Diagram Works

Therefore, no current will go from the collector to the emitter of the transistor. All the current will instead pass through the LDR and the potentiometer.

This makes the LED light up.

The Components Used In The Light Detector Circuit

The resistor R1 controls the amount of current going through the LED. It’s simple to calculate. I have written an article on how to calculate the resistor value for an LED.

If you are using an LED with 2V voltage drop, you will have a 7V voltage drop over the resistor when the transistor is ON. By using Ohm’s law we can find the current:

And 18 mA is usually a good current value for common LEDs.

What if you want to power the circuit with something other than a 9V battery? Then you need to change the resistor value to get the right amount of current flowing through the LED.

The variable resistor R2 is used to change the trigger point for the LED. That is, how much light that is needed for the LED to turn ON and OFF.

You can probably get away with a 10k potentiometer. It depends on the resistance of your LDR. But with a 100k potentiometer you will have room for a wider range of LDR values.

Making The LED Turn ON When it’s Dark

You can also make the LED turn ON when it is dark instead of when it is light. To do this, replace the NPN transistor with a PNP transistor like this:

Now it’s time for you to build this circuit. It’s very important to build stuff, not just read about it. So get yourself the components you need and build it!

Get the required components from an online electronics shop.